Neighbor of the Month – November 2014

We are delighted to introduce you to Carl E. Dickerson as part of our “Neighbor of the Month” series-an effort started last November to highlight Elysian Valley residents and stakeholders. It is our sincere hope that doing so contributes in some fashion to better know one another, build, grow and appreciate the make-up of our community.  The NW thanks Carl Dickerson for his contribution to EV.  If you missed our earlier recognitions (Robert Garcia, Frank & Lucy, Raul Martinez, Bob Berg, Pauline Pritchett, Ronald Muir, Susan Campos, Mrs. Lau Wong Svi Ching, Tracy Stone & Allen Anderson), we invite you to refer to past listings on the EVNW website. 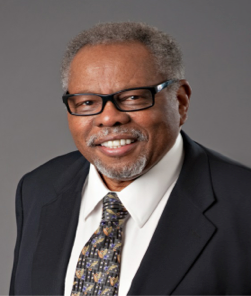 Carl E. Dickerson was born in McKeesport, Pennsylvania in 1938.  He grew up in the small town of Duquesne, Pennsylvania—a steel town during the hay day of Pittsburg as the steel center of the world.  This was a blue collar town where 90% of men worked in steel mills to support the nation’s steel consumption and the going war effort.

Carl’s dad was a steel worker, union leader and treasurer of local CIO Steel Workers Union.  He too was the financial secretary of the Black Elks fraternity.  His mom dedicated herself to raising four boys at home.  During the Eisenhower administration, Carl remembers his mom working as a maid for approximately a year during a steel strike that had men unemployed. When asked what he remembers most about his early upbringing, Carl remarks “always having a job.”  “I did everything from collecting fallen coal from passing freight train cars alongside our house, to shining shoes and having an early morning paper route at age 10.”

Carl left town at the age of 17 to attend Lincoln University in 1956 where he earned his BS degree in 1960.  He stopped units short of a Master degree from Temple University.  Carl went on to teach high school biology and chemistry and also worked as a health inspector.
Carl always knew he would go to college.  He remembers being the only black kid in all of his early classes.  When talking German in 10th grade, all of his classmates were sons and daughters of East European steel working immigrant families from Czechoslovakia, Russia and Poland.“I was really more fortunate than most guys to have had two exceptional parents who instilled in me honesty and a very strong work ethic.  These qualities were equally present in my grandparents.  I was brought up with the adage that I had to be twice as good to be even.”

Carl’s three younger brothers too became college educated and very accomplished.  Two of his brothers earned PhD degrees and went on to teach at Williams College, Dartmouth, Carleton and Vanderbilt University.  His other brother now deceased went on to retire in management from the JC Penney Co.“We knew we had to work hard and perform well to provide our families and their families an even chance to go forward”, says Carl.  He is glad that today’s kids don’t have to work as hard “to get an even shake”.  The Dickerson family evolution to excellence began with his great-grandfather, a Mulatto slave in or about 1864.  “When you hear stories from your great-grandfather about when he was somebody else’s property, you are motivated to overachieve.”

Carl married at age 26, his now wife of 50 years, is a registered public health nurse serving underprivileged communities.  Both are proud parents of two girls.  Carl moved West in 1964 to run the health department for Kodiak Island, Alaska for an annual base salary of $7,200.00.  He was motivated by a desire to make more money, to achieve and to make his parents feel proud.  With a stop in San Francisco, and both he and his wife falling in love with the place, their journey to Alaska fell short.  Responding to ads for teachers in nuclear science and civil defense, Carl was hired by the University of California, becoming only 1 of 6 people in the State to teach early responders how to survive a nuclear attack during the Cold War with Russia, which in essence called for assured mutual destruction.  He did this work for two years.

In 1963, Carl and his wife attended the Civil Rights March on Washington. Carl considers Mr. Clarance Jones—then Dr. Martin Luther King Jr.’s lawyer and today a Scholar resident professor at Stanford University— as one of his closest friends.

Carl is the head and founder of Dickerson Employee Benefits (an insurance brokerage firm) operating in Elysian Valley. This business traces back to his early work with New York Life insurance in 1965-66 where he sold life insurance, estate planning, and quickly become one of their top producers.  He was only the 2nd or 3rd African-American to be hired by the Company in the US at the time.  It was during this time, that as a country, equal employment opportunity became law.  Prior to this, people were not hiring blacks, Hispanics, women and other minorities.  They didn’t give them equal opportunity, says Carl.  For this reason, it is Carl’s opinion, that President Johnson is one of the great presidents in American history.  “He was a driving force behind putting equal opportunity in play”.  “All citizens are given equal opportunity as a goal—making the US the greatest country in the world,” says Carl.

Having become the top producer for New York life and liking the prospect of working for himself, Carl decided to build his business (Dickerson Employee Benefits) around the immigrant community.  He became a wholesale distributor for health plans for all major carriers and soon earned the trust of other insurance brokers to write their proposal and assist them in growing their business. The key to the success of Dickerson Employee Benefits has been an all-inclusive model that embraces all cultures.  Carl was a pioneering lobbyist to make available health applications in multiple languages.  He credits his success to always approaching people with good will, having a genuine interest to teach others the business, always being available and earning customer loyalty.

Carl is a firm believer in helping others and is much involved with multiple non-profit groups.  “You do well by doing good,” says Carl.   He bought his first facility as an independent in 1972 and presently has a foot print in all 50 states.  He counts approximately 3500 brokers that work through Dickerson.  He employs 60 + employees, plus multiple consultants.  While still involved in the business, he has his son’s in law, Tony Lee and Michael Wolff, running the day to day operations.  Dickerson Employee Benefits came to Elysian Valley from its prior location within the LA Chamber of Commerce building on Bixel St.  Their growth, location and space made coming to Elysian Valley in 2001 and easy choice.  The Dickerson building is a modern two story structure on Riverside Dr. with a sizable meeting room and a beautiful cascading fountain, which compliments the neighborhood.

For Carl, it is important to be a good neighbor to the Elysian Valley community.  He makes his building available to various neighborhood interest groups and is home to the Elysian Valley Neighborhood Watch monthly meetings since 2009.  When asked why he is so willing to give back, Carl says that much is expected from people to whom much has been given.  Dickerson Employee Benefits supports summer youth internships for area youth and has made its expert personnel readily available to help Elysian Valley residents navigate the Affordable Care Act.   “Part of being a good citizen is helping out the community where you are making a living”, says Carl.  “It’s the moral thing to do.”   We consider ourselves part of Elysian Valley, says Carl.

Carl believes in hard work, doing the best job possible, no excuses and using the highest standards as a benchmark.  This philosophy is embedded in the Dickerson employee culture.  The Dickerson workforce is made up of ten different ethnic groups (including but not limited to Japanese, Chinese, African American, Hispanic, Russian, Filipino)—very much in line with the demographic make up of Elysian Valley.  Carl’s single most dear accomplishment is his role as Chairman of the board in a non-profit that sponsors and promotes young screen writers to write positive success stories about everyday American minorities.  “The most important cultural influence in our society is movies and television. For this reason, stories need to be balanced so that people don’t grow-up with limited expectations of success.”

Carl hopes to be remembered as a good father, husband and employer.  For Carl, family is everything.  He believes we are all conditioned to seek the approval of our parents and having it is a measure of success.  Carl considers himself fortunate to have had his parent’s approval.  He is a person of faith and   believes in the “Godly act of helping others and seeing people for who they are, without seeing color or sex and treating them as you would treat your own brother or sister.”