Update: Jan. 25, 2014: the EVNW has posted the full presentation for your review here:

you may provide comment on this bridge design and how it will affect you by clicking this link: 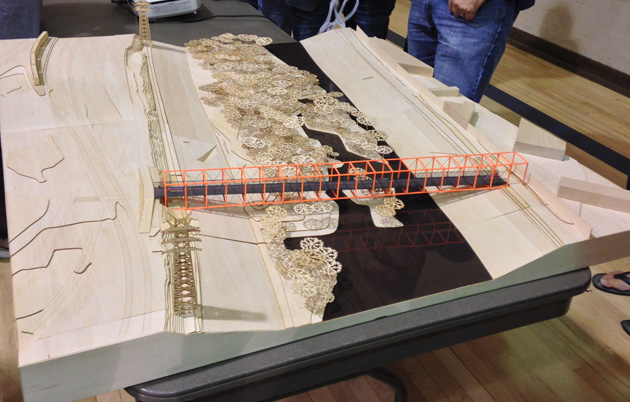 A group of community members and public officials came together last night at the Elysian Valley Recreation Center to view the design for the proposed bridge that will span across the Los Angeles River from Elysian Valley to Cypress Park. Councilmember Mitch O’Farrell opened the meeting, echoing the feeling of anticipation for the project, although the event was not without criticism from community members.

Architects from SPF:a introduced the project by reviewing the guidelines and restrictions they had been given by the City’s Bureau of Engineering, including environmental and structural factors. They then briefly discussed their design process, emphasizing their desire to create a relatively simple structure that offered an efficient way for pedestrians and bicyclists to move from one side of the river to the other. The Box Bridge, as it is referred to in the event literature, offers a geometric design, approximately 20 feet wide, with designated lanes for those on foot and bikes. The bridge’s bright orange and purple coloring allows the structure to glow and pop against the backdrop of the River water and concrete embankment.

When asked about the cost of the bridge the Bureau of Engineering representative mentioned that the initial budget was set for $5 million, but his office may request an additional $3 million from the city for the complete project. The overall project, including design and construction, will take approximately two years, placing the proposed completion date in 2015.

The presentation left some community members in the audience feeling dissatisfied. Some expressed a feeling of being completely left out of the process, and their opinions dismissed. This cast a troubling shadow over the presentation and the project. Whether intentional or unintentional, this oversight by the Bureau of Engineering and the architects to consult the neighborhood residents may take a concerted effort to remedy.